Sensitization campaign and information on HIV/AIDS

This project is part of the SCI North South Programmes. Volunteers should be 20 years old, have previous volunteering experience and take part in the Preparation Workshops organised by their sending branch. More details from your sending branch.

Purpose of extra costs:
The 200€ paid by the volunteers will be used in this following way: - 2/3: organization of the workcamp (accomodation, food, water, materials, transports) - 1/3: administration fees
Required Language:
French 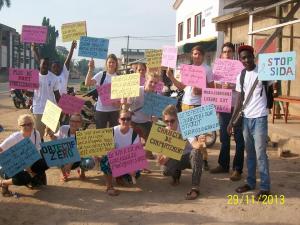 Description: It is true that the appearance rate of HIV / AIDS in recent years in Togo has decreased (2.5 in 2016 to 2.1 in 2017) but this does not prevent that the contamination continues to progress . Thus this project is reintroduced into the list of summer projects by the NGO ASTOVOT. The project aims to inform and educate the largest number of people especially young people about HIV / AIDS and STIs. The goal is to reduce transmission, strengthen prevention and screening measures. The project also aims to build and strengthen the skills of community peer educators in conducting HIV / AIDS . Targeted areas are considered particularly sensitive where young people have little knowledge of the risks of the disease transmission, and are usually unaffected by awareness campaigns.

Type of Work: THE MAIN ACTIONS

Study Theme: The main goal is to help reduce the HIV prevalence rate in vulnerable areas. Other goals are:

Accommodation: The volunteers will be housed together in the same house with several rooms (usually 2 to 4 rooms) and will live near the project site. Housing will be provided with plastic mats or straws but volunteers can however provide small inflatable mattresses or small floor mats (no bed), sleeping bag, mosquito nets etc. The kitchen will be organized by the volunteers themselves. FOOD Volunteers will cook and eat together their meals. In the kitchen, they will use the local products. There are many various vegetables and fruits in location, so vegetarian and vegan diets can be continued.

Language: The languages of the workcamp are English and French. But it’s important to note that the exchanges in English are very basic.

Approximate Location: Situated at 110 km in the north-west of Lome (capital of Togo), the municipality of Agou is a remarquable city. It is a mountainous region which shelters the highest mountain of Togo: the "pic d'Agou" with its 986m altitude. This mountain offers a wonderful view over Togo and Ghana. The vast majority of the ten thousand citizens live from agriculture and cattle breeding. One can find cereals, root tuber, fruit (bananas, oranges, mangos, pineapples, avocados). The village is known for its legendary hospitality and rich cultural life (folkloric groups named "Akpèssé" or "Bobobo").

Internet access and electricity are limited according to the areas of intervention of the projects. HOBBIES Apart from the activities to be carried out on the building site, you can enjoy walks, meetings with the particularly welcoming population, organize parties and excursions to visit the surrounding villages.